In 48 countries we’ve reviewed the legal/regulatory environment for financial cooperatives/MFIs.  Working with industry and policy makers we help translate a policy framework into practical solutions for safe financial institutions. Examples of recent work include:

Under a program administered by the Eastern Caribbean Central Bank developed an examination manual, software to automate report from credit unions, classroom training and on the job training of credit union supervisors. Led international teams of supervisors to conduct four cross jurisdictional examinations of some of the most systemically important credit unions (relatively to their national economies) in the world.

On-behalf of the World Bank, led training and development of a risk-based supervisory system for the National Bank of Rwanda.  For the fastest growing financial cooperative system in the world we helped the central bank develop a of risk-based on-site and off-site inspection process and manuals, developed and conducted a training program for 60 supervisors, developed a CAMELs ratings and ranking system and a uniform, credit policy for the sector.

To prepare the Financial Service Commission of Barbados for a forthcoming Financial Sector Assessment Program (FSAP) review, we conducted an on-site review in late July/early August of the FSC’s credit union supervisory processes and systems.  Recommendations for improvement and alignment with global best practices for credit union supervisory practices were developed.

On behalf of the International Monetary Fund and World Bank, we conducted a financial review of the largest credit unions in the Organization of Eastern Caribbean States.  Credit unions in this region are the most systemically important in the world with deposits ranging from 4% to 28% of domestic GDP per country. Recommended actions for insolvent institutions and legislation changes were include in the final report and presented to the Governor of the Eastern Caribbean Central Bank.

To aid the Financial Services Regulation Commission with its newly mandated responsibility of credit union supervision, a customized training program and a joint examination was conducted for the largest credit unions in the country.  A risk-based off-site supervision manual was developed for the country that is integrated with common prudential reporting forms.

For the Filene Research Institute assessed the business case for American credit unions to offer microenterprise loans to their members. Specific case studies explored the markets in South Florida, Puerto Rico and Hawaii.

For the Association of British Credit Unions facilitated a national dialogue on the options for improving the scale and efficiency of credit union operations.  This included an analysis of models for consolidating back office operations.

On behalf of the World Bank, providing guidance to the government of Zambia in its efforts to start a credit union for public service workers.  With one of the weakest credit union systems in Africa, we are forging new ground and re-looking at the regulatory and supervisory framework for credit unions.

Training Needs Assessment of Rwanda SACCOs: July – August 2012
On-site interviews with 45 SACCO board members, management and staff in 18 SACCOs, in all provinces of the country were conducted. A cross section of old and new, financially healthy and weak, rural and urban SACCOs was conducted.  The information gathered in interviews was then verified and prioritized through technical and senior management-level meetings where buy-in was received from the central bank, ministry of finance, Rwanda cooperative agency, United Nations Capital Development Fund, Access to Finance Rwanda, Association of Microfinance Rwanda and local CGAP-certified trainers.

Interviewing Global Leaders 2012
Through a series of video blogs called PlanetCUNA, we interview cooperative, credit union and banking leaders from around the globe. Guests include CEO of the European Association of Cooperative Banks, President of the International Cooperative Alliance and heads of national associations of credit unions.

Co-chair of a global working group on consumer protection and creation of a road map for banks, MFIs, credit unions and policy makers to utilize in their efforts to achieve full financial inclusion.  Includes evaluating and coordinating efforts of the World Bank and OECD’s activities in consumer protection compared to an industry-led approach.  Helping develop a certification process for consumer protection as a steering committee member of the SMART Campaign.

Served as the microfinance lead expert for the World Bank's assessment of the financial consumer protection environment in Rwanda. It included detailed legislative and regulatory reviews, meeting with consumer groups, policy makers, urban and rural financial institutions and presenting the findings and recommendations to the central bank Governor.

Developed the International Credit Union Consumer Protection Principles and facilitated the assessment of credit unions in Mexico, Philippines and Kenya against them.  This work aided the development of the SMART Campaign where Mr. Grace serves on the steering committee.

On behalf of the International Monetary Fund gather and analyzed data on the deposit structure of all financial institutions.  We provided guidance to the Central Bank in designed the policy framework and developed the financial models for the country's first deposit insurance system.

On behalf of the Barbados Credit Union League developed financial models for credit unions to offer deposit insurance through the Barbodos Deposit Insurance Corporation (BDIC). This included a financial review of all 35 credit unions, the structure of deposits and their health. Led negotiations with the Minstry of Finance and BDIC for adoption of the deposit insurance framework. The framework was officially adopted by the Prime Minister in 2012.

On behalf of the National Treasury of South Africa a deposit insurance system was designed for cooperative banks. This included a review of the structure of sector deposits, assessment of the financial condition and the possible loss ratio comparison against fund size and fees. 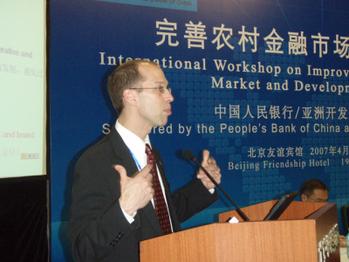 Dave Grace & Associates was founded with the intent of helping financial institutions globally grow a broad-based middle class.  We are a diverse group of international consultants committed to helping our clients further the work of pro-poor institutions.  With experience working in over 70 countries we have a global base of knowledge from which we draw upon.

The core areas of our work include: